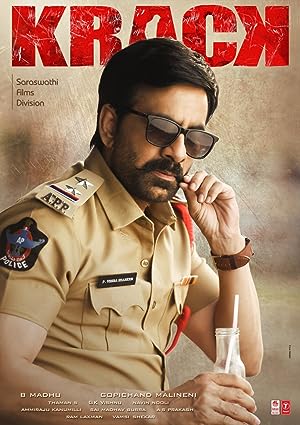 Krack is an action entertainer based on real incidents, Ravi Teja plays a tough and fierce police officer who doesn’t think twice before bashing up anyone. Loaded with deadly goons, high-octane action, chase sequences, and captivating dialogues, Krack promises to be a full-blown entertainer.

Director Gopichand Malineni’s Krack follows a typical cop-story template, which pushes the audience to mainly focus on the screenplay and how he keeps us engaged throughout. Poturajju Veera Shankar (Ravi Teja) is an extremely violent police officer. He thrashes and cuts the body parts of Dundas when they commit crimes. Veera Shankar gets a transfer to Ongole where Katari (Samuthirani) along with Jayamma (Varalaxmi Sarathkumar) rule. As Katari commits a murder, Veera Shankar takes up the case to punish him.

With Krack, Gopichand Malineni has concentrated on keeping the screenplay interesting. In some places, it gets too much as certain scenes have an overload of information. But, he makes up for it by throwing some surprises at fans on and off. But, it is this inconsistency that puts off the audience at times.